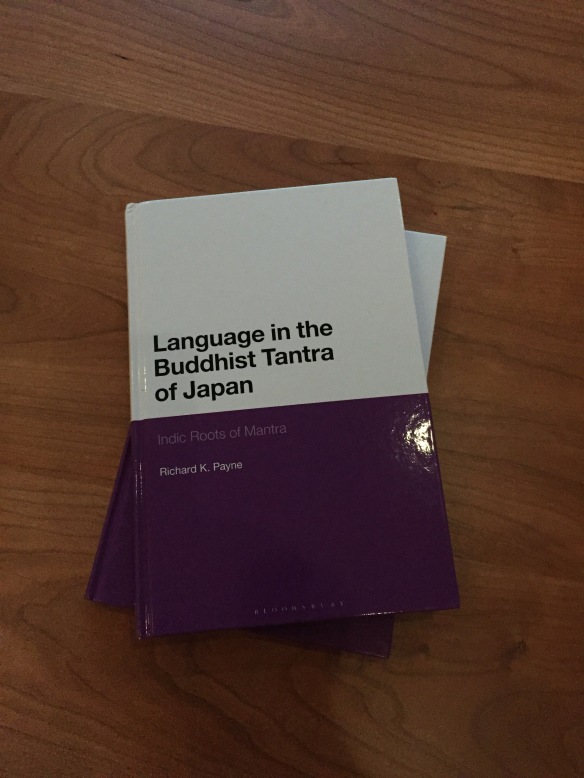 I’m very happy to announce that Language in the Buddhist Tantra of Japan is now a thing. Published by Bloomsbury Academic (here). This is a project that has stretched across three decades, from the early 90s to last year. My thanks to my friends and colleagues who have encouraged me during that time, and to all those who made it possible for me to devote time to reworking all that material into this present form.

Language in the Buddhist Tantra of Japan dismantles the preconception that Buddhism is a religion of mystical silence, arguing that language is in fact central to the Buddhist tradition. By examining the use of ‘extraordinary language’—evocations calling on the power of the Buddha—in Japanese Buddhist Tantra, Richard K. Payne shows that such language was not simply cultural baggage carried by Buddhist practitioners from South to East Asia. Rather, such language was a key element in the propagation of new forms of belief and practice.In contrast to Western approaches to the philosophy of language, which are grounded in viewing language as a form of communication, this book argues that it is the Indian and East Asian philosophies of language that shed light on the use of language in meditative and ritual practices in Japan. It also illuminates why language was conceived as an effective means of progress on the path from delusion to awakening.
Introduction
1. Extraordinary Language Use
2. Is Language Communication?: Extraordinary Language in the face of Philosophy of Language
3. Indic Understandings of Language-from Vedas to Tantra
4. East Asian Understandings of Language
5. Emptiness and Cosmogenesis in the Tantric Buddhism of Japan
6. The Clear Light Mantra Homa- Religious Agency in Medieval Japanese Buddhist Ritual
7. The Authority of the Speech of the Buddha: Aural Dimensions of Epistemology
8. Dharaṇi in the Lotus Sutra: Indic Context for the Power of Words
9. Ajikan: Visualizing the Syllable A
10. Concluding Reflections
Bibliography
Index
“This is a magisterial work that brilliantly distils and presents decades of exploring and encountering the nuances and profundity of the “extraordinary language” of Japanese Buddhism. Beautifully and clearly written, this book leads us through a sophisticated and innovative methodology that demonstrates the many dimensions and, above all, uses, of religious language. Richard Payne has provided us with a landmark contribution to Tantric Studies, Buddhist Studies, and Japanese Religion.” –  Glen Alexander Hayes, Professor of Religion, Bloomfield College, USA“This volume on ‘extraordinary language’ in different traditions of East Asian Buddhism, with its richly textured case-studies and its theoretical depth, is a brilliant contribution to the study of Buddhist philosophy and practice of language.” –  Fabio Rambelli, Professor of Japanese Religions and ISF Endowed Chair in Shinto Studies, University of California, USA

“Payne’s project is an extended meditation on “the transmission of certain ways of thinking about language from India through China to Japan.” Examining mantra, dharaṇi, Daimoku, Komyō shingon, and ajikan in light of European and Asian theories of language, Payne rejects simplistic reductions of such “extraordinary language” to an apophatic rejection of language and argues that linguistic efficacy is “central to the Buddhist tradition transmitted from South to East Asia.” –  Charles D. Orzech, Professor of Religious Studies, Colby College, USA